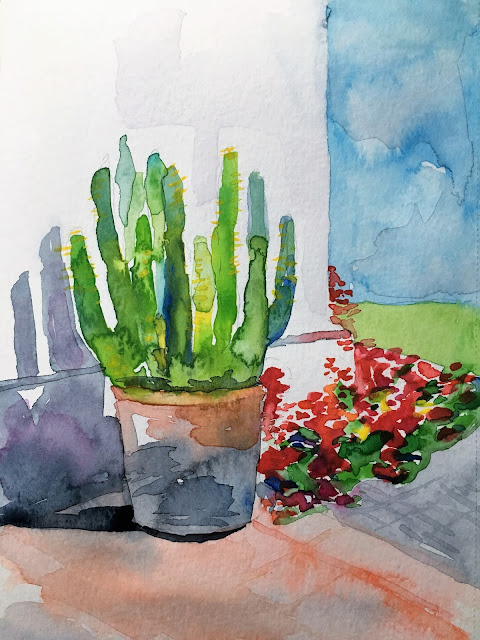 While the sun was still sharing its light in my office-studio last night, I painted this little scene from a photo I took in January while at Hotel San Cristobal near Todos Santos, Baja California, Mexico.

Sketching or painting from travel photos after returning home is the gift that just keeps on giving. It made me so happy to think about the trip while I painted. I mean, I was there in my mind, feeling the warmth, the sun, and the love of family all over again.

Thanks to Larisa Aukon’s “Gouache on the Go” workshop at the Scottsdale Arists’ School last month, I am seeing the value of multiple drafts of a painting. The first two drafts were in gouache. As I was finishing the second one below on a small sheet (5”x7”) of  paper, Larisa came by and said, “You know why this isn’t working? You have too many shapes for such a small composition, plus they are not tied together; they’re too discrete.”

I agreed and made a mental note to try it again after I returned home. Lst night I decided to try the scene in watercolor rather than gouache, keeping Larissa’s advice in mind. For the painting above I took out the square window and tree that were in the composition below. I also blended a little of the red that is in the flowers to the shadow to the left of the cactus plant, subtly echoing the red, to anchor that bright color into the composition a little more. I used a vertical layout rather than horizontal, thinking that showing more of the white wall and blue sky might help ground the painting.

I do think the watercolor at the top is the better composition, but I’m not giving up on another gouache draft. That’s because one thing I really like above the painting below is brilliant blue sky against the bright red flowers. I mean, those colors next to each other give off such a jolt of energy! Gouache definitely allows for bright, intense colors. So…stay tuned for another version. 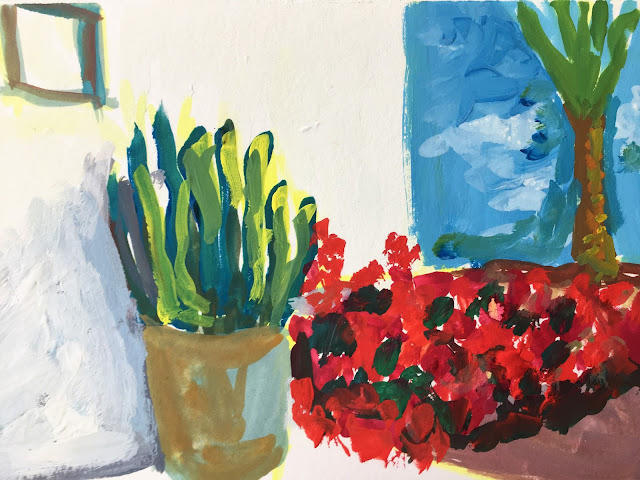 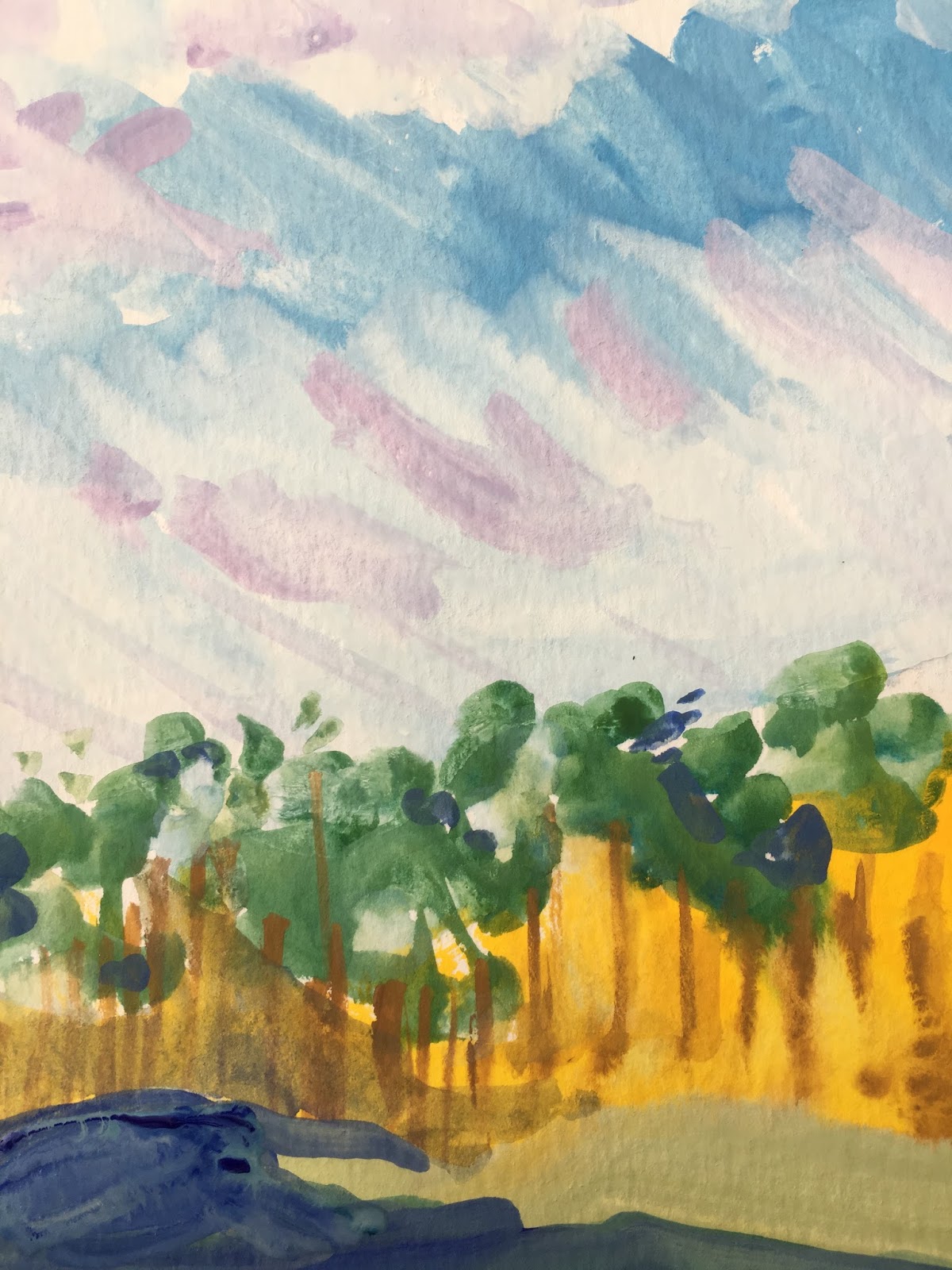 More of what I learned from Larisa Aukon's "Gouache on the Go" class at the Scottsdale Artists' School:

1) Try several versions of the same subject. (This image is a close-up gouache painting of the sky/trees portion of the watercolor painting I posted last time.)

2) Use a body of paint when you're working with gouache. Add just a little water so the density is like butter or sour cream. (However, for this painting I added a little more water; it just seemed like the thing to do.)

3) Gouache has traditionally been used by artists for preparatory sketches for larger oil paintings. (Because gouache is water-based, it's an easy medium to use when doing those sketches.) However, a gouache painting can become an end in and of itself. Just be sure to preserve under glass because, like watercolor paintings, gouache paintings are affected by moisture.

4) Larisa's approach is to simplify what she sees so the painting becomes rather abstract even though it is still somewhat representational. I learned that I really love this approach.

After taking the two-day workshop, I felt like I could see potential compositions everywhere I looked. The feeling has faded away somewhat, and today I had to force myself to sit down and paint for an hour. The first painting was a mess, but this one...well, it brought that feeling back.

Gotta remember that: sometimes you don't feel like creating until after you get started. 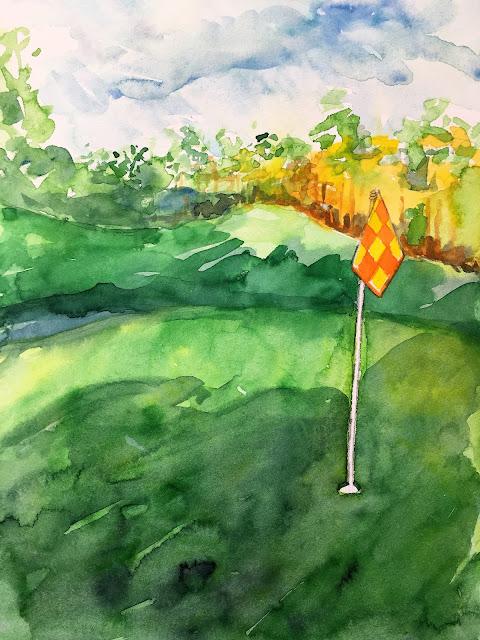 During the “Gouache to Go” workshop last week at the Scottsdale Artists' School (SAS), a participant kept exclaiming her frustrations with the medium. Clearly a talented and experienced artist but new to gouache, she issued a steady stream of “Geez’s” and big sighs and loud “Urrrrrggghhh’s.”

At first her outbursts were exhausting to me and I hoped she would stop. Eventually, thanks to my meditation training, I was able to let her comments come and go without paying much attention.

Because of her I even found reasons to celebrate – not just my meditation training, but also my training as a writer. I’ve learned not to be too upset by those shitty first drafts and to tell the inner critic “thanks but no thanks” until the draft is further along.

I won’t say I never get frustrated creatively, but for the most part, I don’t expect perfection, especially early on. Instead, a sense of curiosity comes in handy…especially now, when it comes to art. Why did that composition work better than this one? What is another way to approach this subject? What medium would be interesting to try?

I’ll write more soon about the three-day watercolor-sketching class that I went on to take with Amery Bohling while at the SAS, but for now let me just say that I am recognizing that even with my failures, I am learning something. None of the nine little w/c sketches that I did during Amery’s class merit posting here; however, this a.m., five days after my return, I painted the image at the top. (For inspiration I used a photo sent to me by a golfing enthusiast.) I have to say, I kinda like it. But even that was the third try. The “rejects” for the top image are below; basically, it turns out they were studies – just practicing with color and paint and how to represent light.

I am having a heckuva lotta fun with my failures and successes. Feeling lucky to be jazzed, not judge-y, about art right now. 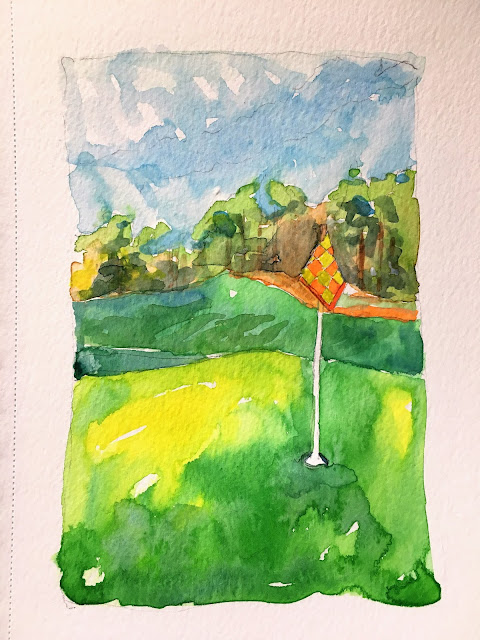 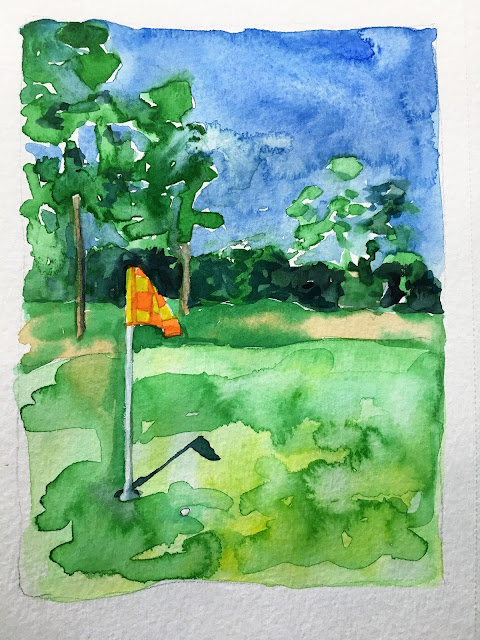 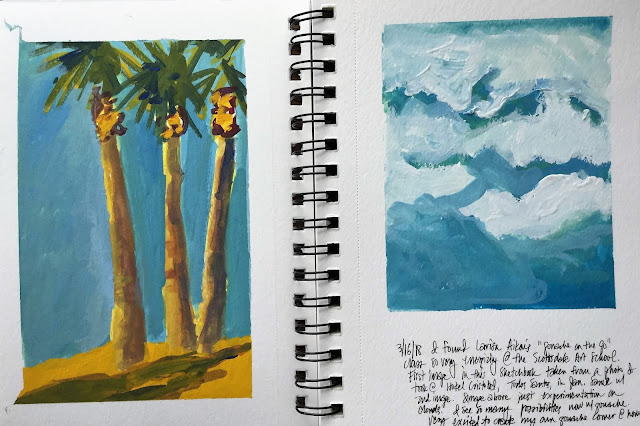 Color. Composition. Values. Intensity. I have so much to learn. But it really is a matter of practice and experimentation. Michelangelo is said to have told an apprentice, "Draw, Antonio, draw, and do not waste time." After last week's "Gouache on the Go" workshop with artist Larisa Aukon at the Scottsdale Art School, I see and feel right now how much work I have to do. But the nice part is that I feel I have new tools to do it with.

Nothing can take the place of a comment here and there from an accomplished instructor/artist. A little bit of encouragement, a little bit of correction...it all goes a long way.
at March 21, 2018 No comments: 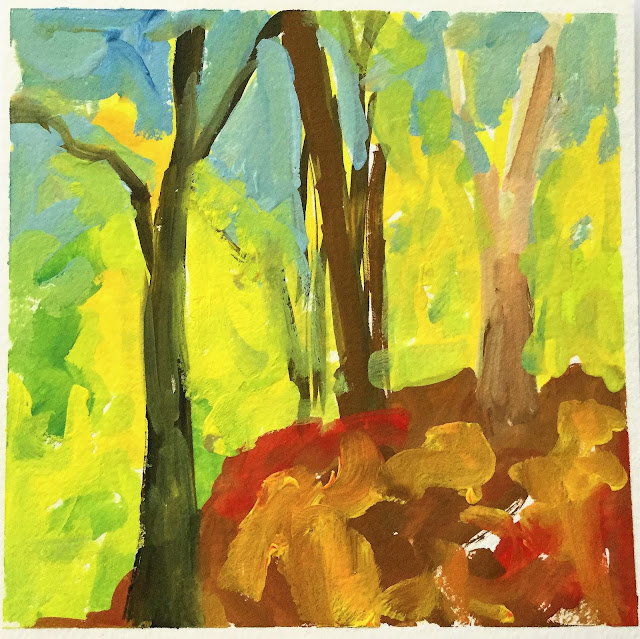 “This is finished!” It was a real rush to hear Larisa Aukon say this about a couple of my small gouache paintings last week at the Scottsdale Art School.

There are so many good online resources for learning curves in art, but last week I was fortunate to experience the magic of a “Gouache on the Go” face-to-face workshop with Larisa.

Larisa grew up and was educated in Latvia and now lives in Arizona. In the workshop she emphasized quick paintings on location, using small pieces of watercolor paper (6”x6” or 5”x7”). The paintings can be finished compositions or can be studies for larger oil/acrylic paintings, or both.

She did a few demos and shared some of her tricks, such as how to travel lightly for outdoor painting with just a small backpack. As we painted inside the classroom and outside the grounds of the beautiful school, she walked around and offered sparing but helpful suggestions and comments. 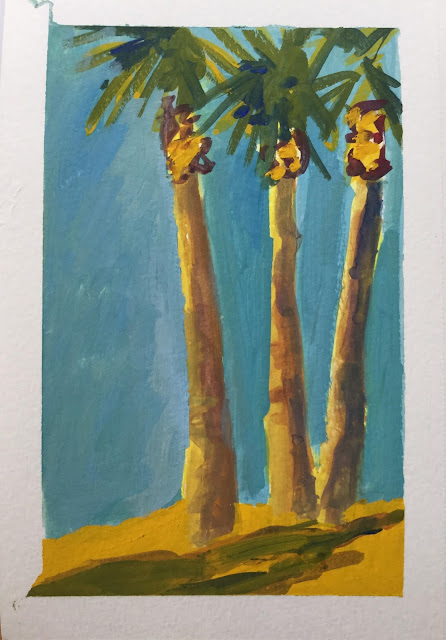 Later I’ll share more about what I learned at the workshop, but for now I’ll just share these two paintings that earned Larisa’s urgent, music-to-my ears comment, “This is finished!”
at March 20, 2018 No comments:

I met Sally forty years ago when I was twenty and she was the one in her sixties. I was a waitress at a Howard Johnson’s restaurant on... 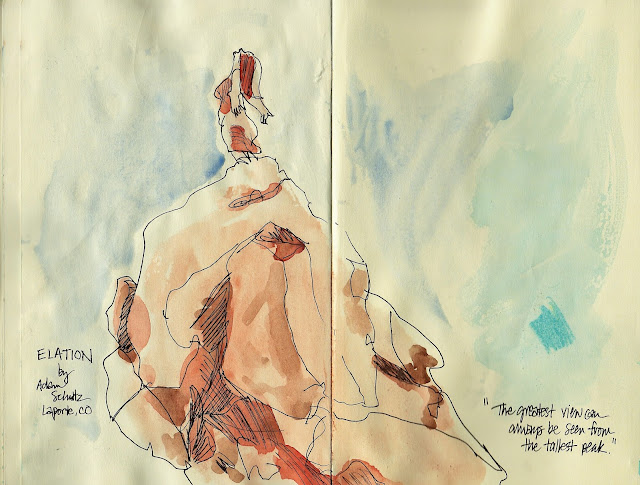 Suzanne Kelsey
Suzanne is a writer, artist, and university instructor who recently moved to the SF/Bay area from the Midwest. Her book, Skipping Church: Notes from An Accidental Minister's Wife, was recently published by Shanti Arts. It is available via Amazon, Shanti Arts Publishing, and many other bookstore venues both online and in-person.